What a lot of people don't know about me is that I was a top piano tuner-technician-rebuilder for some 30 years. I was considered one of the top 3 piano techs in Orange County California. What does this past experience as a piano tech have to do with being a quality figure maker? I'll explain in a moment.

Early on (1977) I became the piano tuning manager for Fullerton Music, Fullerton CA, then after about 4 years became the manager over at Kay Kalie Music in Anaheim CA, which was an authorized Yamaha piano dealer. Here's an old pic of me tuning a nice Yamaha upright piano at that store. . . . 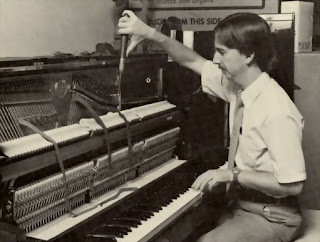 I was a lot younger and had a lot more hair! (grin) During my time working for this fine music store I had the privilege of attending the Yamaha 'Little Red School House', which is an intensive, hands on, high level training program (there was a 3 year waiting list for techs to get in at the time) with some of the top piano technicians in the country as the instructors. I became an authorized Yamaha technician. Here I am with one of the instructors, LaRoy Edwards. . . . 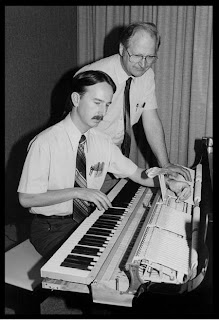 That's me regulating (adjusting) the mechanism on a Yamaha grand piano (the whole mechanism slides out as one unit so you can work on it). Later, I also did an intensive training program at the 'American Institute of Piano Technology' in Los Angeles, where we took pianos apart (all brands, all sizes) as far as they come apart, and put them back together again! After only two years of being there, I was asked to be one of the instructors and to serve on the board of directors. What a grand honor that was!

I also learned a ton through years of constant education through the Piano Technicians Guild, which had some very strict testing of your tuning, regulating and repair skills in order for one to be considered a Craftsman Member of the Guild. . . . 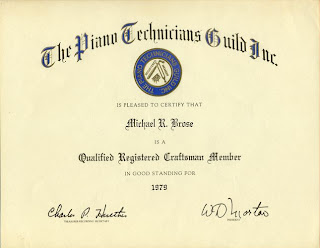 In my 30 year piano tuning-tech-rebuilding career I serviced well over 10,000 instruments. Makes my ears tired just to think about it! (grin) I serviced or tuned everything from the smallest spinet piano or harpsichord all the way up to 9 foot concert grand pianos, player pianos, and reproducing pianos (automatic player grand piano that plays with full expression), etc. From Steinways to Bösendorfers with more than 88 keys, and everything in between!

So what does this experience have to do with becoming a quality figure maker. For me, a lot! As a top piano tech and rebuilder, I spent years working regularly on very complex mechanisms where a few thousandths of an inch can make a difference in how well the instrument performs. A lot of these instruments are far more complex than some of the most complicated ventriloquist figures out there. I learned what makes the difference between a quiet, smooth operating, quality mechanism and one that is noisy, binds, and will not hold up well over time. All of this experience has helped prepare me for building quality mechanisms that can stand the test of time.

So then, does one have to have been a piano tuner-technician to become a good figure maker? No. But it sure can help! (grin) This is just one aspect of my past that has helped me to do what I do now, and do quality work. And for me that is the only way of doing a job.